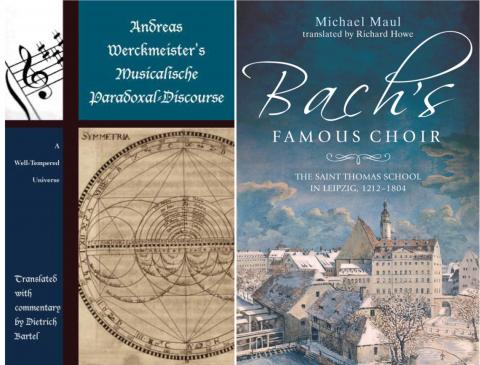 This review is of two recently published books, both translations from German, both based on historical sources, and both essential to gain a greater understanding of the context in which J. S. Bach worked. In Dietrich Bartel’s words, Musicalische Paradoxal-Discourse (‘or extraordinary speculations on how music has an elevated and divine origin’) is Andreas Werckmeister’s ‘most extensive treatise on the speculative nature of music. No other German baroque treatise provides a more comprehensive discussion of the theological foundation of all aspects of music theory’ (p. 13). Michael Maul’s Bach’s famous choir was initially motivated by his inquiry into why ‘the chronological list of the St Thomas cantors is made up almost exclusively of famous and historically significant musicians’ (p. 1), his answers being drawn from key German source texts reproduced in full in the two-volume Dokumente zur Geschichte des Leipziger Thomaskantorats, (Carus, Vol.I, ed. Maul, forthcoming in 2020, and Vol. II, A. Glöckner, ed. 2018). Breathing confidence that comes from a wealth of experience, the distinctive writing styles of the two authors illustrate depth of insight, breadth of knowledge, and sensitivity to their subject matter.

Translating modern German into idiomatic English is easier said than done. Should the translation retain the original German sentence structure and literal meaning of words or should it aim for a readable dynamic equivalence? Maul, whose book was originally published in German in 2012, was well aware of the problems a translation would create. ‘In my book I make extensive use of lengthy quotations […] and I often embed shards of quotations from my source texts into my own sentences. This procedure makes for all kinds of challenges for the translator’ (p. xiv). Richard Howe, Maul’s translator, had to solve ‘countless problematical individual instances’, aiming for ‘the best possible compromise between readable, comprehensible and correct’ (p. xiv). Bartel’s challenge, which he describes in the informative preface (p. xiv), was Werckmeister’s German:

I tell my students: if you want to understand music from antiquity to 1700, start by reading Werckmeister. But that is not as easily done as spoken. Like so many German authors of the time, Werckmeister assumes certain proficiencies from his readers, including a fluency in detailed biblical knowledge and a fluency at least in Latin, if not also in Greek, in addition to a familiarity with treatises and publications concerning music, theology, philosophy, and a number of related disciplines… And then there is the issue of Werckmeister’s own prose, at times somewhat oblique, riddled with obscure references, peppered with all kinds of innuendo and, of course, in rather archaic German.

It is not only the archaic language that can disguise the richness of the original message. More often than not it is the thought-world from which Werckmeister is writing that hides the meaning from the modern reader. This necessitates Bartel’s outstanding Introduction to which he refers in footnote comments in his translation. For example, in Werckmeister, Chapter Four, Bartel’s first footnote reads: ‘Werckmeister does not go into greater detail regarding the teaching of the affections in this treatise, but rather assumes the reader’s familiarity with the topic. See p. 24ff.’ (p. 70) It is this kind of cultural difficulty that makes Bartel’s English translation with its excellent contextual essay and notes so very welcome.

Werckmeister’s Musicalische Paradoxal-Discourse was published posthumously in 1707. The 24/7 online availability of rare books has enabled many of us to reassess the received reputations of music theorists such as Werckmeister, who was once known for little more than his work on tuning systems. Having some of these rare texts translated into English is a luxury. In this case we can thank renowned scholar, Robin Leaver, for overseeing the Contextual Bach Studies series published by Lexington Books.

Best known for his Musica poetica: musical-rhetorical figures in German Baroque music (1997), Bartel brings to this translation decades of teaching experience and research into German literature and culture. He does everything in his power to assist the reader of this book, encouraging the reader to compare his translation with the 1707 original (Preface, p. xv). Part I contains an introduction to Werckmeister’s Musicalische Paradoxal-Discourse, a biography of Werckmeister, a discussion of his other treatises, and a brilliant thirty-page essay summarizing the content with detailed footnotes explaining the sources that lie behind Musicalische Paradoxal-Discourse. Part II is the translation, again with invaluable footnote comments to deepen the reader’s understanding.

Bartel’s pedagogical heart is apparent throughout. From the first page one senses a caring mentor willing the student to understand. I have read Musicalische Paradoxal-Discourse numerous times in the original German, but it was not until Bartel’s ‘tutoring’ through this book that I understood how blind I had been to some of Werckmeister’s unstated implications, one of which has propelled my research along an exciting new line of inquiry.

And the most obvious question: What is paradoxical in Werckmeister’s text? In the dedication, Werckmeister‘s heirs give a clue: ‘The esteemed reader is requested best to interpret whatever may appear paradoxical and all too strange according to his own understanding, for the departed author did not consider every point to be doctrinal truth’ (p. 52). In other words, let the reader decide for himself which bits he agrees with. It sounds pretty liberal, and these are not the words of Werckmeister himself. However, we find the same message at the end of Werckmeister’s own text: ‘I would wish that the esteemed reader would regard my inadequacy, which at times may have become apparent, with Christian charity, and interpret everything positively, particularly if the application of allegories and parables seems too far-fetched.’ (p. 150)

A researcher at the Leipzig Bach-Archiv since 2002, Michael Maul first came to the attention of the international Bach community in 2005, when he discovered an unknown Bach cantata, Alles mit Gott, which merited a new catalogue number, BWV 1127. In 2012 his monograph ‘Dero berühmbter Chor’: Die Leipziger Thomasschule und ihre Kantoren, 1212–1804 (Lemstedt Verlag, Leipzig) immediately met with an ecstatic reception. This review is of the long-awaited English translation, published in 2018 by the Boydell Press, translated by Richard Howe.

Maul’s eye for humour injects life into what may easily otherwise be a dry account of historical events and new documents. In the introduction, for example, he makes an excuse to include amusing details that are scarcely essential for the narrative: ‘Scharnagel from Wunsiedel (documented 1505), who was probably not the cantor, had to flee Leipzig in 1515 on account of his involvement in a brawl. In 1513 a cantor died after performing at a wedding and eating spoiled meat there’ (p. 12).

The five chapters inevitably cover the expansive timeline unequally: Chapter I ‘From monastery to municipal music school, 1212–1593’; Chapter II ‘How the St. Thomas School became a music school, 1594–1640’; Chapter III ‘Famous throughout the whole world of music, 1640–1701’; Chapter IV ‘Odd authorities with little interest in music: the St Thomas school in crisis, 1701–1730’; Chapter V ‘School for scholars, or ‘conservatory of music’, 1730–1804’. By page 236 Bach has died, leaving the final sixty pages to cover Harrer, Doles and Hiller before the epilogue brings the story briefly to today.

The scope of the content is vast. The 300-page text is complemented by one hundred pages of reference material, consisting of twenty pages of Appendices listing Cantors, Rectors, Overseers of church and school, a Timeline of the St Thomas Choir and St Thomas Cantorate, Income and expenses of the St Thomas School, Cantors of St Thomas School 1810 to present; and eighty pages of endnotes, bibliography and two indexes. There are also 68 high quality black and white gloss plates on 48 full pages, which serve as documentary evidence. Intriguing as these bewigged images may be, I found the characters more alive in Maul’s narrative.

The only thing that detracted from the pleasure of Maul’s book was Howe’s translation. There were sentences on almost every page where I felt the English was in need of editing to make it more idiomatic and to flow more freely. For example, in the preface by John Eliot Gardiner, there is a sentence that is seven lines long, containing five subclauses (‘His more nuanced […] authority of its cantor’, p. xiii). It reads like a re-translation of the German translation which will have originated in English. This is not a good impression at the start of a book. In the grand scheme of things, though, this irritating feature of the translation in no way reflects negatively on Maul’s message.

After the original German publication in 2012, Maul’s golden touch for discovering new sources continued. Rather than updating the text for this English version, Maul adds a ‘Note on the English edition’. Chief among his new finds is a 1751 letter that he discovered in 2013 by a former St Thomas choir prefect, Gottfried Benjamin Fleckeisen, who ‘claimed that for two whole years (apparently sometime between 1743 and 1747) he functioned as the de facto St Thomas cantor in place of the capellmeister—doubtless Johann Sebastian Bach […] I have presented an extensive analysis of Fleckeisen’s letter and its implications in Bach Jahrbuch 2015 […] English translation by Barbara Reul online in www.bachnetwork.org/ub12/ub12-maul.pdf ‘ (p. xvi). Maul also generously alerts the English reader to a book ‘by my colleague Jeffrey S. Sposato which appeared a few months ago and in a number of ways extends my presentation of Leipzig’s church music under Bach’s successors’ (p. xvi).

It is scientifically proven that good writing, regardless of subject matter, is best remembered and appreciated when read in a relaxed frame of mind. In my case this state is best realised by sitting on a comfortable settee with book and pencil in hand, and a large pot of tea on the coffee table. How long a book holds my attention under these circumstances is the best indicator of well-balanced writing that I know. Counterintuitively, Bartel/Werckmeister passed this test with flying colours. I remained alert throughout and could have read it all in one sitting had circumstances allowed. Maul/Howe on the other hand fared less well.

In summary, the content, the new sources and contextual information in these two books are excellent. In my opinion the language in Bartel/Werckmeister is lighter and more pleasurable to read. Most importantly, though, they are both wonderful resources for English speaking researchers and musicians. Read them!